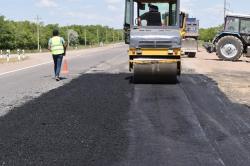 Patching Repair Works Carried out on More than 500,000 m3 of Republican Roads

In order to ensure the safety of road traffic on the roads of Kazakhstan, the defects appeared on the road surface during its operation, such as potholes, corrugations, and rutting, are being rectified.

It may be mentioned here that, the main reasons of damage and deformation of the road surface are due to the non-compliance by the drivers of heavy vehicles with the permissible axle load (8 tons) limit and the established temperature regime for the use of the road, which, in turn, leads to significant damage to the carriageway with the subsequent damage of the road surface. This factor significantly affects the work carried out, therefore, there is overachievement of the production plans. Therefore, in the Turkestan and Karaganda oblasts, the plan was fulfilled by 168%, in Zhambyl - 147%, East Kazakhstan - 139%, Kyzylorda - 120%, West Kazakhstan - 126%, Pavlodar - 102% and North Kazakhstan region by 105%.

The works are being carried out under a comprehensive deadline program in order to ensure uninterrupted and safe road traffic movements on the republican roads network.

«The completion of the Kazakhstan’s section of the Western Europe – Western China International Road Corridor is very important. It is really the construction of the century»

«We set an objective to develop infrastructure. And it turned out to be within our power. We are currently reviving the New Silk Road. We have opened access to the countries of the Persian Gulf and the Greater East. We have opened the Eastern gates, paving the way to the markets of China and the entire Asian continent», "Kazakhstan-2050” Strategy.
Address of the First President of the Republic of Kazakhstan – Elbasy, 2012.

«The executive authorities need a complete, high-quality Nurly Zhol Program. This is a strategic project which will affect the entire transport infrastructure».